skip to main | skip to sidebar

The lengths we go through for achievements. I didn't really NEED that achievement, it doesn't count towards the Loremaster achievement but I wanted it anyways. This achievement is amusing because you get shrunk (by a type of mushroom), drugged up (by 2 different mushrooms), and then blasted into the air (again by mushrooms). Notice a theme here? Mushrooms. Cute, seemingly innocent mushrooms.

In Deepholm, where we met the lovely Stone mother Therazane (see previous post), do the daily quest called "Fungal Fury" and get your daily dose of shrooms. Quest objectives- run around, destroy 10 "sprouting Crimson mushrooms" and earn 10G. (The easiest 10G you'll ever make in this game anyways.) Of course, avoid the killer mushroom giants and hostile mobs while doing so.

And while you're destroying the cute little mushrooms, watch out for the ones that blast you backwards into the air... into the waiting arms of hostile mobs. But the most fun shroom of all, the Shrinkshroom. 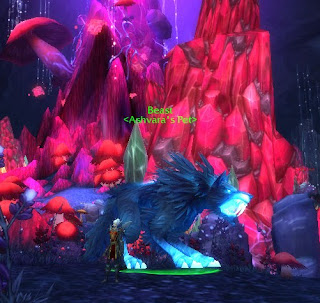 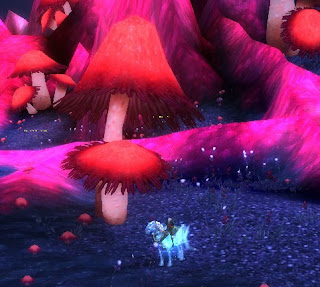 The cutest thing is, even your flying mount shrinks to your size when you're under the effects of the Shrinkshroom. Imagine an army of shrunken Horde toons running around screaming for blood.
thus spoketh Ash at 7:06 PM